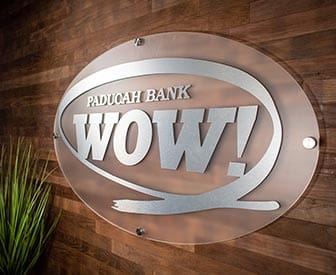 That is, unless you’re at Paducah Bank, where the conference room is the setting for a bold experiment.

This $850 million-asset community bank is going all-in on social media, so much so that it has transformed a conference room into a social media studio instead.

It’s been outfitted with a green screen, backdrops, lights, cameras and all the digital equipment necessary to produce high-quality video for social media. Its multiple sets include one with a news desk and another with chairs for interviews.

The social media room is part of Paducah Bank’s “Wow!” brand experience, a philosophy of service that the bank describes as “unqualified devotion” to its customers and the community.

The “Wow!” is meant to be experienced in many ways — bank-sponsored theater productions, the Wow Magazine with features on local people and businesses, an ice cream truck and a wider array of products and advisory services than most community banks.

Now there is also the video initiative, which is connecting Paducah Bank to customers in a way that a conference room rarely, if ever, achieves.

“Social media opened the world to us and let us connect to people in ways you can’t connect in print or even in person,” Guess tells The Financial Brand. “People can see banks as unapproachable at times. Social media helped us connect in a bigger and better way.” 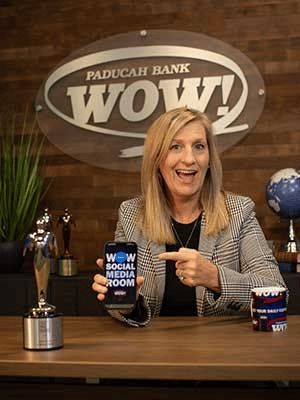 Its relationship-driven social media strategy has helped generate some impressive stats. Wells Fargo, for example, dwarfs Paducah Bank in assets by more than 3,200 to 1, but only 110 to 1 on Twitter followers. And Chase Bank beats Paducah Bank on Facebook likes by only 204 to 1.

But Guess is always looking to improve. And now that the social media room is up and running — as of October 2022 — she anticipates being able to use video more often and drive customer engagement, in social media and face to face.

Research backs up this plan: Video achieves more engagement on social media than any other kind of post. Twitter, for instance, says that “tweets with video attract 10 times more engagements” than those with only text, while static images on Instagram garner just two-thirds the comments that videos do.

“People can see banks as unapproachable. Social media helped us connect in a bigger and better way.”

Guess got the idea for the social media room after seeing the videos posted by her daughter’s university. She arranged a visit to the university’s studio, took notes, and returned with a pitch for CEO Herndon.

“I said, ‘We need to create a place where we can invite our customers to come in and share their stories,’” she recalls. “‘We need to talk about what we’re doing in the community and reach a younger audience like universities are doing.’”

Herndon agreed. And then he made what Guess calls the bank’s single biggest investment in her idea — he gave her the conference room.

“It was bold. This is a conservative bank and a social media room is out of the ordinary for anyone,” Guess says.

Many banking leaders see the potential in social media — after all, 82% of Americans use at least one of the social media platforms, according to Statista.

But the vast majority of banks aren’t using social media to great effect.

One hurdle to social media success: the banking industry has a risk-averse — even jaundiced — perception of social media. Consider Wells Fargo’s 2021 annual report, which warns about the reputation risk it faces from employees’ social media use. Or take Citigroup’s “LinkedIn Social Media Site Usage Rules,” which runs 3,824 words and includes the contact information for its general counsel.

Only 20 U.S. banks earned a spot in the 3Q 2022 edition of the Power 100, The Financial Brand’s global social media ranking.

The general attitude is clearly protective — which, to some extent, is wise — but it’s not designed to foster innovation, connection, and authenticity. Consumers care about those things, and social media is uniquely capable of delivering them.

There is a learning curve, especially for those who tend to be more reserved in their communications, Toma concedes. “It’s quite difficult to transition from a formal medium to a more informal one and it takes time,” she says.

Videos on Any Topic for Every Social Media Site

Communication and relationships were Guess’ intent for the social media room. “[Bankers] think we know what [customers] know. But you really can’t know unless you’re communicating,” Guess says.

At the news desk, for instance, bank employees can discuss financial service issues, introduce products, or announce community partnerships. The area with the armchairs is for conversations with bank clients, topic experts and members of the community. The green screen allows Paducah Bank to use graphics that enhance or explain products, programs or projects.

Each video is posted on a social media platform appropriate to the content — and social media aesthetics vary. TikTok, for instance, is known for short, high-energy videos, LinkedIn has a professional vibe, while Instagram is suited to more personal, emotive content.

Each platform has its own demographic profile too: people on Facebook skew older, Twitter has a largely male, well-educated audience, Pinterest tends toward the affluent, and so on. By tooling the video to the platform and consumer, Paducah Bank can engage the audience the way it wants.

The bank has yet to post on TikTok, but that is its next social media play, and Guess is thinking about ways videos on that platform can bring the bank and customers closer.

The more people see Paducah Bank’s videos, the more ideas they suggest for using the social media room. A local meteorologist is interested in using the green screen in broadcasts. Business owners have talked to bank leaders about videos featuring their stores and products. Nonprofits in the area have asked about partnering on videos to support community projects. Day by day, the social media room is becoming a community resource as well as a marketing initiative.

“We’re experimenting and looking for creative ways to make sure that we can continue to grow our audience and have those conversations,” Guess says. “Things move so fast and we need to keep serving our customers and community in a better way. That was our intention from the beginning.”

Investing in Social Media vs. Spending on it

Guess says the cost of creating the social media room ran around $5,000 because quality gear is inexpensive and easy to install. The cameras are iPhones and the lights came from Amazon.

The leadership team sees the expense as an investment in the bank, she says. That’s somewhat unusual in American banking, too. “Unfortunately, many companies do not see marketing expenses as long-term investments,” says SocialBee’s Toma, “so they tend to cut them.”

Still, Paducah Bank’s investment is paying off in engagement. Take the bank’s Halloween Facebook post, calling for costume photos (and offering a $100 to a randomly selected respondent). Within a day, 621 people commented, 16 shared it, hundreds contributed photos, and dozens “@ed” other locals. And everyone saw the next post on the feed — an advisory piece regarding financial planning for women.

In comparison, U.S. Bank’s Halloween Facebook post got 36 likes, eight shares, and no comments, after one day.

Clearly, Paducah Bank is punching well above its weight on social media. Guess thinks she knows why. “When I look at national banks’ social media, everything is big messaging, big features,” she says. “It looks magnificent, but there’s not a lot of engagement on their pages. It’s a lot of push out, but not a lot coming back in.”

That may be the biggest innovation coming out of Paducah Bank’s conference room. By “bringing in,” not “pushing out,” the videos open genuine, meaningful, and engaging conversations between the community and Paducah Bank. And the investment of a conference room and a few thousand dollars is getting an ROI on customer engagement that bigger banks might envy.