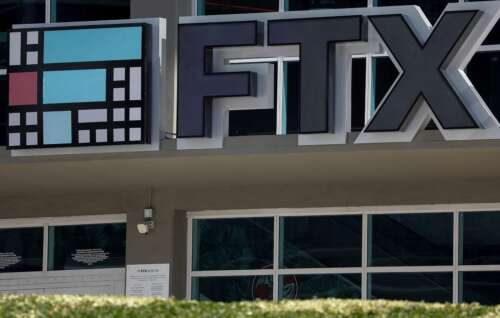 FTX’s business logo at the FTX Arena in Miami

David Burt remains “convinced” in Bermuda’s commitment to fintech even as the crash of a major Bahamas-based cryptocurrency trader stoked doubts globally on the industry.

The Premier has taken to social media in the aftermath of the implosion of FTX Trading Ltd, formerly the world’s second largest cryptocurrency exchange, tweeting that the fallout had been “far reaching” and that he was “greatly saddened”.

Mr Burt noted that neither FTX or the crypto trader Alameda, also founded by the US investor Samuel Bankman-Fried, were “based or licensed” in Bermuda.

But he emphasised the island’s years of experience in regulating digital assets as the island seeks to “help chart that course” despite the global shock after the demise of FTX.

“Regulation plays a role in providing checks and balances,” Mr Burt posted in a series of tweets.

“Under the right supervision, risks can be reduced but not eliminated. Disclosures are essential so that those risks are clear, and prudential oversight is essential to ensure the risks are reasonably controlled.

“We remain committed to the long-term innovation and benefits that will come from this experimental new industry.

“We also recognise the need for a reputable, steady and experienced hand to guide it and remain convinced that Bermuda is well-suited to help chart that course.”

FTX filed for bankruptcy last Friday, taking with it Alameda, which has been implicated in the collapse with its balance sheets revealed to be largely propped up by FTX tokens.

The breakdown of what many worldwide saw as a promising investment in an emerging industry cast a pall over digital trading.

Bermuda forged ahead in 2017 under the Progressive Labour Party government to take a lead in regulating cryptocurrency and blockchain business.

Concurrent with fintech, insurance and reinsurance technologies have developed rapidly – with deep implications for an industry that grew into a mainstay of Bermuda’s international business sector.

Mr Burt has repeatedly linked building fintech on the island to a generation of new Bermudian jobs.

On Twitter, he highlighted the island’s “decades of experience in managing risk in the insurance industry”, maintaining the experience had carried over to the regulation of digital assets.

The island hosted a tech summit last month in which Mr Burt said the island would have to balance innovation with “zealously” guarding its reputation.

In his Twitter posts, Mr Burt wrote that cryptocurrency was “reinventing and rediscovering” finance.

“It is repeating some mistakes while providing curious new insights and developing rapidly.”

Mr Burt added that he looked forward to “ongoing engagement with the industry”.